I’m Rohan and I work in an IT company. I have worked with a lot of companies but this one was the best among all due to the friendly and cooperative environment. This is a story of the time when I saw my boss fucking his secretary in the office and how I followed them to home.

One day I was staying rather late at the office. As I was passing by the door of the lobby, I could see some lights coming from my boss’s room.

When I arrives at the door of the cupboard that opens slightly,I hears the sound of ahhhohhahhhhahhhhahhh,,,. I then peeks through the hole and sees that my boss is sucking on the secretary’s breast. “Oh my!” he whispers to himself. I also looks inside. He was fully clothed and the secretary had a bare head where she sucked and stroked her small nipples.

His hand went to her hole and she began to stroke her pussy. Then he took off her skirt, her black pants and started sucking on her pussy. The secretary was in heaven moaning hard and her hand was in her hair as Mohini looked at her for the first time. She sucked him for a few minutes and got up and moved closer to his table. The general secretary gets up and walks over to her, pushes her onto the bed, takes off his shoes and jumps on top of her. He then directs his penis to her pussy, fucking her in his lap like a fucking whore. He slapped her pussy called her names and kept on banging her harder and faster. He made a loud moan and came out in her.

He walked over and kissed her tightly on the lips.. They kissed for a while and then washed each other’s bodies.

Now he got up and told her to come with him to his home. They both went home together. I followed them to their home. The bedroom window was quite open.

She undressed herself quickly and he would make her bend into a cow pose. She would look at his big erect cock. She was completely naked as and walked to bed, he quickly opened his shirt and looked at her naked whore. Now suddenly his mouth was already sucking and biting her left nipple.. “Ooh, baby, mmmmmmm… you’re the best bitters, lick more please … yes, yes uh”. While she was breastfeeding, she took off his pants. Slowly and sexually kissing every inch of her body he then  went to her pussy, kissed it and licked it like crazy that Mohini was shouting and moaning, “Aaaaahhh… you are such a beast ahhh… uh… ooh… uh… ooh”. He continued to sink, deep and his finger squeezed until he gasped. He started licking it like a wild cat; “Nice to taste … umm”.

He was licking her pussy with all his tongue moving in and out, making her dry and wet at the same time. He took his cock and pushed it over her mouth and she sucked on it it like a candy. “Mmmmm… mmmmmm”, he whispered. “Yes… yes… licked it like a bitch, yes”, he whispered back as he came and spread it all over her breasts and mouth. She took her boobs and washed her pussy. He pulled out his penis, got up and inserted it slightly inside her washed pussy and now he was in a position to be in heaven. “Yes… oh… you bitch ahhhhhyouuuuu whore ahhh”, He pushed her faster and faster pounding her pussy like a whore… the bed began to shake and her boobs moved up and down. 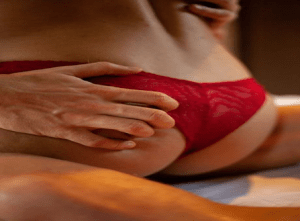 She held her breasts tightly so that they would not jiggle and move forward very quickly. His dick was hitting her pussy walls and there were screams like, “Yes, yes, more, aah, ooh”. He finally pulled out and came on her stomach. She went to her cupboard, took out the cream and rubbed it on her dick. He came back, turned her around and grabbed her by the ass and shouted in pain, “Aaaaah! Bastard ”. His speed continued and she pushed as hard as she could… his dick was pounding her like a beast… as if he wanted to tear her ass. She then shouted, “saaaaaah harder you bastard harder you asshole ahhhhhhhhhhhhhhhhhh” he kept on fucking her ass with his dick and he came in with full pressure and pulled out his cock after a cumming all inside her ass. 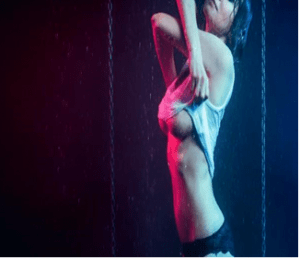 She fell onto the bed after giving him a hard blow and both of them were very tired of fucking now.

I pulled up my pants and went to home and had a very peaceful sleep and I was rewinding in my head what I had seen just an hour ago.

In My Room- Sex with the Roommate

A lively Summer Evening with Samar