Bhavna had persuaded me to go for a walk that October afternoon. Usually, something that I refused to do, but somehow she had made it. And in retrospect, I wasn’t angry about that either.

We strutted through a huge park; a park that I had never been to before. Amazingly, despite the good weather and the weekend, few other people were out. Bhavna joked, made nonsense, and was somehow very pleased that I went out with her. I should do it more often. 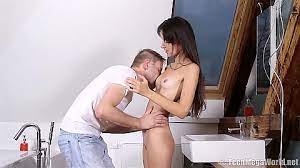 Suddenly she saw a swing on a huge oak tree. She rushed at it like a small child, squealing with pleasure. When I looked behind me, I realized how attractive she was dressed today; black leggings in black, ankle-high and heeled ankle boots; above it a thin, black leather jacket that ended just above

the buttocks. Her straw blonde long hair contrasted nicely with the black of her clothes. The slim, seemingly endless legs were only topped by the sight of her crisp butt. How lucky I was!

Bhavna swung back and forth on the swing, cheering as I had never seen her before. I stopped and enjoyed this spectacle; I have to admit, however, that I was more intent on looking at her voluptuous body than on her swinging wings. It was due at home, that was certain.

She was still sniggering happily to herself, but something had just happened, something had settled in her pretty head. I could see that perfectly because she had put on that strange look and the two wrinkles on her forehead, which were typical for something that she was hacking out again.

She stopped and jumped off the swing. But she didn’t come over to me as expected, but went around the rocking board and showed me her back. I had no idea what she was doing there, and I really couldn’t see it. She seemed to be fiddling with her jacket or something.

Suddenly she leaned back and lay back on the rocking board. She had opened her jacket completely and instead of the expected underwear, she was wearing bare skin underneath. She leaned forward, stretched her arms out, and let her long, blonde hair hang down. Completely fascinated, I looked at the two mountains of meat, their wonderfully big tits. What a sight.

What else was there to do but hurry to Bhavna? I stood in front of her with slightly trembling legs and reached for her breasts. I grabbed it with my hands full. A great feeling. Her nipples straightened up in an instant and I leaned down to gently caress them with my tongue. My tongue danced between the two boobs and I felt that I was getting hornier. Would I be able to endure this at home?

Bhavna answered my question. Suddenly she fiddled with my pants and before I knew it she had got my stiff prince out of my pants. Now she didn’t need to jerk him hard, which she quickly refrained from. Instead, she put it in her mouth with a slight gurgling sound. I groaned and my hands closed almost brutally around her tits.

I started to fuck her in her throat without being asked because she could hardly move on the swing. Her teeth scratched my hard sex, nibbled on it,

and maltreated it as I had never heard of her before. It was a crazy experience and it was no wonder that I was ready to spray in no time.

Bhavna felt my coming and slowed in her movements. I loosened my hands from her tits and grabbed my throbbing throat. No sooner did I hold it in my hand than it snared off. With complete astonishment, I realized that I could shoot my sperm into world history in a high arc. Again and again, my gender contracted and threw body fluids on my trembling breasts of Bhavna. She had drawn me to her meanwhile, sucking my testicles while I was still enjoying my climax.

At some point, completely out of breath, I came to myself again. I held on to the swing with both hands and looked down at me completely fascinated. My mind, which has become significantly smaller again, dripped completely smeared with saliva and sperm. Bhavna laughed. I looked up with a glassy look. She closed her leather jacket over her smeared breasts.

“You should wrap it up again. People come over there,” she whispered to me.

I looked around and saw an elderly couple who would not have been so enthusiastic about what we were doing. I hastily stuffed my cock back in my pants and yanked the zipper up.

“But at home, you continue, right?” It was more of a request from Bhavna than a question. “What you can rely on,” I had caught myself again.

Taking her hand, I ran. Now it was me who was acting completely silly here. The older couple looked at us questioningly, but at the same time amused, as we passed them …

In the next story, I will share with you another story named “Sex with EX-Lover – Day 2”